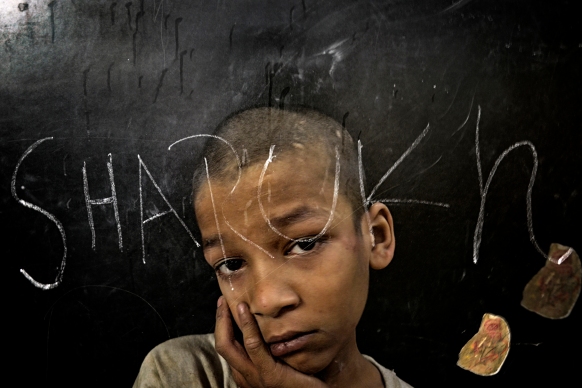 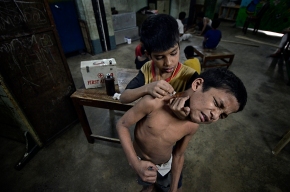 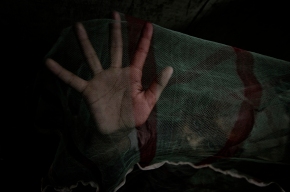 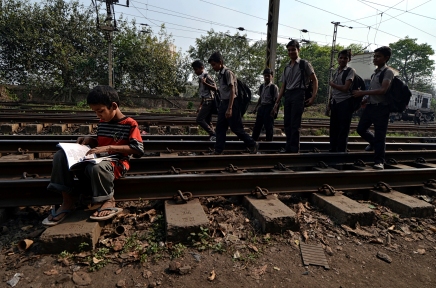 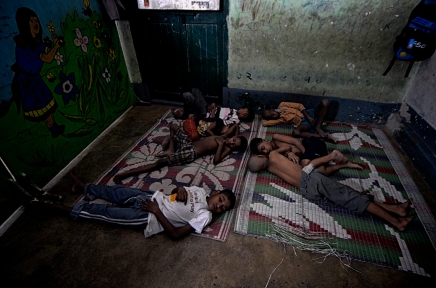 “I am lost..I am trying to find my mother…I am Shahrukh…Shahrukh Mondal”…

These were the first few words uttered by a 7 year old, when he was rescued by the RPF from Platform No.4 of Sealdah Station, Kolkata, India. As the little child pushed his way through the crowd of thousands of people in the platform, his eyes searching every nook and corner for his mother, his wails and cries got drowned in the noise and din, and finally he was handed over safely to the Sealdah Child-Line by the RPF. A distressed Shahrukh was questioned about his whereabouts, his mother’s name, the name of his village, how he lost his way…but Shahrukh only managed to provide the bare minimum information to the social workers of Child-Line; his mother used to stay away from home at night, and his father had left home to settle with some other lady, somewhere far. Thus Shahrukh’s new address became the Child-Line home “Uttaran”.

Every day the RPF rescues many children from the Sealdah station, some who ran away from their home because of the brutality they face every day, some who have been shown the door by their parents and relatives, some who have been forced to get lost because of poverty in the family, some who were on the verge of being sold for money. Shahrukh began his journey at “Uttaran” with many such kids – Bhola, Krishna, Raihan, Abhijit, Mansoor…Shahrukh started spending his days with his new group of friends. The huge storeroom beside the Platform no. 9, nearly 100 years old, was their shelter. With the help of the railway people and the selfless and loving initiative by a private NGO, Shahrukh became a part of a daily routine. His morning started with prayers, followed by breakfast, studies, playing in the railway tracks and the platform, square meals a day, fun and frolic with friends filled Shahrukh’s days with sunshine. The activists at the NGO made conscious efforts to keep the child away from various distractions in and around the platform-antisocial activities, drug scams and various sources of illegal income; children being employed to pick up used and stray bottles from the station for money. In his heart of hearts, Shahrukh used to yearn for his mother, especially on days when it rained. He used to sit in a corner and weep for his mother. He used to miss his village, the moss covered white walls of his house, his pet cat, wet football ground in his school….everything.

As myriad colours filled the sky on the day of Holi, Shahrukh’s mind raced down memory lane; last year on the same day his mother had smeared red colored “abir” on his face. As tears streamed down his face, Bhola, Krishna and others rushed to him, held his hand and dragged him to the platform where they all got drenched in the colours, they enjoyed the day of colours in full spirits.

While Shahrukh was spending his days in “Uttaran”, the NGO, the RPF were actively involved in trying to find Shahrukh’s mother. The nearby police stations had already been informed, and they all prayed for the reunion of the mother and child. After 7 months of tiring efforts made by the NGO, Shahrukh’s prayers were finally answered. Shyamali Mondal (Shahrukh’s mother) found her son, finally they found each other.

Life is strange and unpredictable. When you just think everything has ended, new doors open. We sail from the grief of losing our loved ones to the joy of getting united with them again, Shahrukh walked away holding his mother’s hand to his home in Champahati (South 24 Parganas, West Bengal).

I was a part of Shahrukh’s journey of seven months, a part of his memories, his hope, his fear, his love. I still remember the day when Shahrukh’s mother had come to take her child; there were tears of joy in the child’s eyes and a smile which reflected his inner peace. It seemed he had already started missing his new found friends, Bhola and Mansoor. They were also crying that day, but strange as it was, I could not decipher whether they were crying for Shahrukh or whether they were waiting with hope to hold their mother’s hand…maybe someday…maybe some other time.